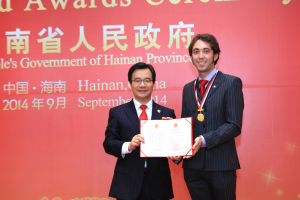 Hainan Province People’s Government Awarded Unique 1 Asia CEO’s, Mr. Yuval Golan the highest award given to foreigners, the Coconut Island Award. The Coconut Award is a prize given once in two years to Foreign Experts which have contributed to the development of China and Hainan Province.