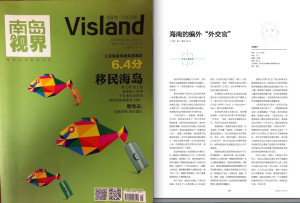 VISLAND Magazine has published an article about Unique 1 Asia’s CEO.
The article highlights Mr. Golan’s love story with China and some of Unique 1 Asia’s current projects.
VISLAND is a popular luxury magazine in China.

Please read the article in English Below:

My relationship with China began in 2009 when my brother gave me a call and invited me to be in his wedding. I should mention that his wife is a native of Beijing.

I’d been deeply interested in Chinese culture for several years, and that first trip to China, in which I experienced for myself China’s unique culture was an unforgettable one. Even though at the time I was working at the Israeli embassy in Holland, I still decided to be in my brother’s wedding and spend 2 weeks traveling around China.
Over the course of 13 days, I experienced China’s delicious food, beautiful scenery, and famous hospitality. At the close of my trip, upon returning to Europe, I couldn’t stop thinking about China and began looking at maps to find my perfect city. Luckily, I noticed a beautiful little island: Hainan. I’m embarrassed to say that I had previously never heard of this island. Other Chinese provinces are significantly larger, so I call it a small island, but compared to Israel where I was born, Hainan is 1.7 times larger.

Thus I left my well-paying job at the embassy, passing up work with several transnational enterprises. I had a 3-month break between projects during which time I spent 2 months in a crash course in Mandarin (I took another 1-month class when I returned to Hainan 2 years later). In the end, I had a pretty good grasp on Chinese. I spent the remaining month touring around Hainan, sampling the local food and coming into contact with the local people.
In the course of 2 months, I established a circle of international friends and met some local business people and government workers. Because they were devoted to the idea of establishing a sister city relationship between Haikou and an Israeli city, and I had fortunately worked in the Israeli Foreign Ministry before, I was able to help them establish such a relationship.

Due to the close relationship between Israeli and Chinese governments as well as my own work on behalf of both parties, in 2013 we were able to formally establish a sister city relationship between Haikou and the Israeli city of Modi’in.
After the formal establishment of this relationship, I became a kind of “diplomat” between Israel and China. Therefore, I decided to start a company in Hainan and permanently settle down here.
I love Hainan. I like the food, like Wenchang Chicken, He Le Crab, Hainan Fen, White Lotus Goose, etc. I also really like the people here, because my Hainanese friends all live very relaxed and free lives. Even when they’re nervous or under pressure, they still find the time to drink a cup of tea and relax. This kind of relaxed lifestyle is something that’s lacking in Israel.

The reason that Hainan wins out against other tourism islands is that of the abundance and variety available here, for example, it has beautiful beaches, great views, volcanoes, rainforests, minority group villages, and unique food. Even so, there are still a number of challenges facing Hainan in its establishment as an international tourism destination. I’ve lived and worked in a number of countries, and have a number of good friends with expertise in fields like agriculture, luxury lifestyles, finances, fashion, athletics, media, marketing, and tourism etc. These fields are all crucial to Hainan in the pursuit of its dream.

Currently, I’ve established my own creative financial consulting company. Actually, my wish in doing this kind of work is to help Hainan along in its development. I hope that we can develop the above-mentioned fields in Hainan in the best way possible, while at the same time improving public infrastructure, opening up resources and protecting the environment. Right now, I want to share with everybody 3 of the projects that my company is currently working on. First is the Hainan Sailing Club, which we hope to be an inclusive, diverse foundation for sailing. At the same time, we hope to develop the sport of sailing in Hainan. Second is a series of cultural events which we hope will be truly international, making Hainan into a cultural center and advancing its development as a tourism brand. The third is our agricultural projects. Following local social and economic development, Hainan has become home to over 10 million permanent residents and is host to around 40 million tourists. Demand for Hainan agricultural projects has also increased significantly, therefore we are helping business from Israel to introduce some of their advanced agricultural technology and innovation to help meet the growing market demand. At the same time, our company is actively participating in other projects in Hainan and throughout the rest of China.

In the deepest part of my heart, I’m absolutely fascinated with ancient cultures, so I established my company’s headquarters in one of the most historically rich and unique parts of Haikou: Old Town. This is not only my company’s office, but it’s also a social club. People can come to meet friends, enjoy a cup of coffee or a glass of wine, listen to speeches, watch movies, or learn new things. This is a platform to provide students in Hainan with an opportunity to work in all kinds of different fields. It’s great to have friends coming from all over!